###Markets drop around the world

January was a terrible month for markets around the world. U.S. markets had their worst January since 2009, with all three major indices posting declines. The Dow Jones Industrial Average was down 5.39 percent, the S&P 500 Index declined 4.96 percent, and the Nasdaq dropped 7.82 percent. All three indices are now well below their 200-day moving averages.

A loss of confidence was the primary reason for the downturn. Market turbulence in China rattled investors, as the Federal Reserve’s (Fed’s) rate increase started to remove their security blanket. Fundamentals also weighed in. A further substantial drop in oil prices eroded that industry’s revenue and profit prospects. Moreover, corporate earnings for fourth-quarter 2015 were expected to decline 5.8 percent. Declining earnings made it difficult to justify the relatively high stock valuations that had prevailed at the start of 2016.

International markets had a worse January than U.S. markets. The MSCI EAFE Index of developed markets dropped 7.23 percent, and the MSCI Emerging Markets Index declined 6.48 percent. Technically, both indices are well below their 200-day moving averages.

###U.S. economy grows, though more slowly U.S. gross domestic product (GDP) growth for fourth-quarter 2015, reported in January, was 0.7 percent, down from the previous quarter’s 2 percent. The decline was due largely to weakness in U.S. manufacturing and exports, held in check by the strong dollar. 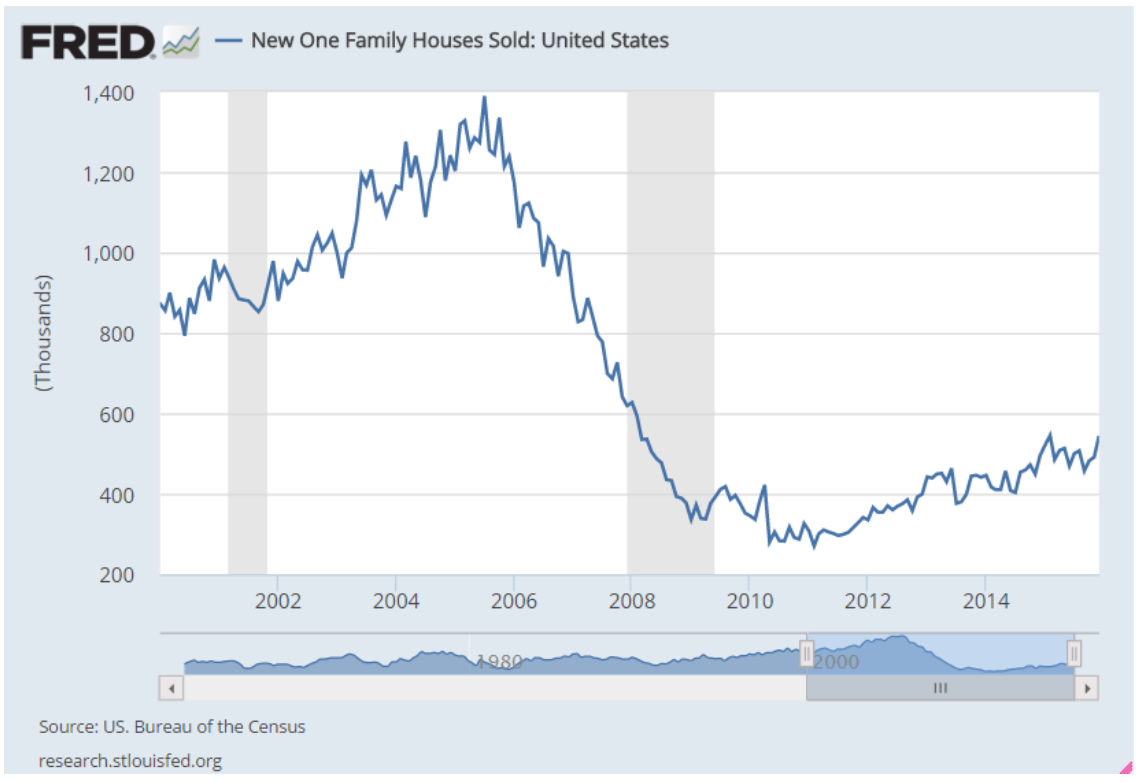 ###International problems multiply Much of the slowdown in U.S. GDP appears to have stemmed from problems in the rest of the world. Substantial declines in China’s stock markets forced concerns about that nation’s financial system and slowing economy to the forefront of world attention. Although the People’s Bank of China continues to drive stimulus, there are signs that the bank’s ability to affect the economy is waning.

Finally, at month-end, Japan announced negative interest rates. This is widely considered a radical move and one that Japan’s central bank took only because all other measures had not succeeded.

The strong dollar has made U.S. manufacturers less competitive abroad and has been a significant headwind for the overall U.S. economy. With other central banks easing monetary policy and the Fed starting to tighten U.S. monetary policy, the divergence could drive the dollar higher. If so, the headwinds for the U.S. economy could strengthen. With this and other factors in play, the Fed could decide to raise rates more slowly than it now projects.

Consequently, although it has been a difficult month, investors should remain calm. January’s events underscore the need for maintaining a diversified portfolio and a long-term perspective. Cautious optimism remains the appropriate stance, as history has shown that markets and economies consistently return to a growth path.

All information according to Bloomberg, unless stated otherwise.

Disclosure: Certain sections of this commentary contain forward-looking statements that are based on our reasonable expectations, estimates, projections, and assumptions. Forward-looking statements are not guarantees of future performance and involve certain risks and uncertainties, which are difficult to predict. Past performance is not indicative of future results. Diversification does not assure a profit or protect against loss in declining markets. All indices are unmanaged and investors cannot invest directly into an index. The Dow Jones Industrial Average is a price-weighted average of 30 actively traded blue-chip stocks. The S&P 500 Index is a broad-based measurement of changes in stock market conditions based on the average performance of 500 widely held common stocks. The Nasdaq Composite Index measures the performance of all issues listed in the Nasdaq Stock Market, except for rights, warrants, units, and convertible debentures. The MSCI EAFE Index is a float-adjusted market capitalization index designed to measure developed market equity performance, excluding the U.S. and Canada. The MSCI Emerging Markets Index is a market capitalization-weighted index composed of companies representative of the market structure of 26 emerging market countries in Europe, Latin America, and the Pacific Basin. It excludes closed markets and those shares in otherwise free markets that are not purchasable by foreigners. The Barclays Capital Aggregate Bond Index is an unmanaged market value-weighted index representing securities that are SEC-registered, taxable, and dollar-denominated. It covers the U.S. investment-grade fixed-rate bond market, with index components for a combination of the Barclays Capital government and corporate securities, mortgage-backed pass-through securities, and asset-backed securities.

Andrea Stackland-Winterer is a financial advisor located at 175 Highland Ave, Suite 304, Needham, MA 02494. She offers securities and advisory services as an Investment Advisor Representative of Commonwealth Financial Network®, Member FINRA/SIPC, a Registered Investment Advisor. She can be reached at (339) 225-4046 or at andrea@e-3-fp.com.